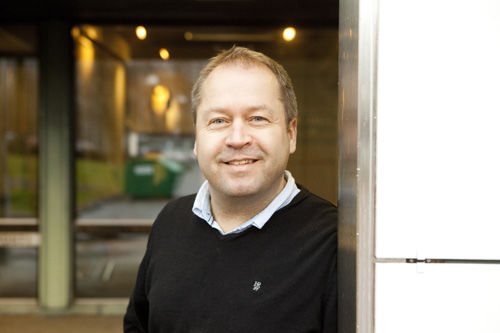 Patrik Holm is one of the members of a research team of the pharmaceutical company Orion, working persistently to find a new, promising medicine for Alzheimer’s disease.

Patrik Holm’s favourite subject at upper secondary school was chemistry, and after school, studying chemistry at the Åbo Akademi seemed like a natural choice.

‘Little by little, I grew more interested in organic chemistry. At the same time, I started thinking that it could be fun to work in pharmaceutical research,’ Holm recalls.

‘The absolute highlights in pharmaceutical research are the rare cases when a research project finds such a promising compound that it is worth investing in and investigating in clinical trials.’

One of such compounds is ORM-12741, the new medicine developed by Orion that could alleviate the memory disorders of people with Alzheimer’s disease. The development efforts draw from extensive long-term research conducted in Finland on alpha-2 receptors.

Alpha-2 receptors are message conveyors between cells in the central nervous system. They respond to certain pharmaceuticals.

‘The aim of the Orion project team was to find a compound that effectively but selectively blocks the alpha-2C receptor. We believe that this compound affects the transmitters in the central nervous system, helping to alleviate memory problems associated with diseases such as Alzheimer’s.’

The development project is now at its final stage. The safety and effectiveness of the new medicine is currently being tested with a large number of patients.

‘So far, clinical tests have yielded promising results. Now we are continuing with more extensive tests together with our partner.’

In 2014, Holm and his team received the Innovation Award by the Chemical Industry Federation of Finland for developing pharmaceutical treatment for Alzheimer’s disease.