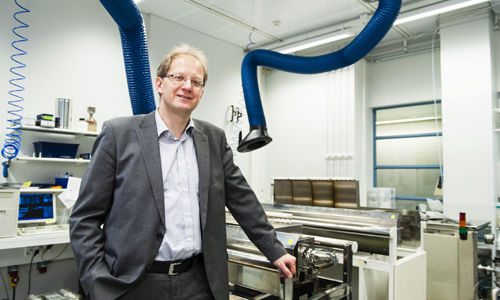 Mikko Ritala is one of the leading researchers of atomic layer deposition. The invention is being utilised in a number of fields, such as in the manufacture of even smaller electronics.

Mikko Ritala, who studied chemistry at the University of Turku, transferred to the University of Helsinki at the beginning of the 1990s to complete his doctorate. At the time, he was studying atomic layer deposition, which was a fairly unknown theme within the scientific field.

Twenty-five years later, the manufacturing method, producing thin films at the accuracy of a single atomic layer, is being utilised in a number of industrial fields. Ritala is one of the most internationally quoted researchers in a field on which Finnish scientists have left a notable imprint.

"We chemists have focused on finding the best possible chemical compounds for the process as reactants. They adhere to the surface of a glass or silicon wafer in a reactor, one atomic layer at a time," Ritala says.

The method serves to produce thin films a single nanometer thick. The films are so thin that one million films would produce a layer of one millimetre.

Atomic layer deposition is abbreviated as ALD. The method achieved its final breakthrough when semi-conductor manufacturer Intel adopted ALD into a production of even smaller and more efficient microprocessors back in 2008.

In addition to the electronics industry, ALD is used in the coating of solar panels and in corrosion protection. Kalevala Koru coats its silver jewelry using the method, thus preventing them from blackening.