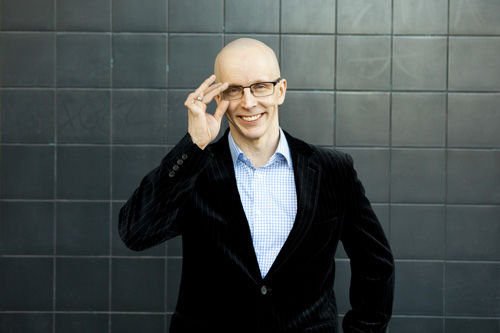 Jarkko J. Saarinen and his research team develop nanostructured coatings that slow down bacterial growth. They can help prevent the spreading of hospital bacteria from spots such as door handles.

Academy Research Fellow Jarkko J. Saarinen fell definetely in love with sciences at the upper secondary school. He continued his studies at the University of Joensuu to become a chemist, but eventually chose physics as his major subject.

Saarinen completed his doctoral dissertation on the optical properties of nanoparticles when he was 23. His career as a researcher continued first with the University of Toronto, then with the UPM Research Center in Lappeenranta. The Åbo Akademi Laboratory of Paper Coating and Converting has been his academic home since 2008.

From September 2014, Saarinen has been participating in an innovative research project, developing coatings that use metal and metal oxide nanoparticles to prevent the growth of bacteria.

‘Since the Age of Antiquity, it has been known that water keeps better in a silver vase than in an ordinary vase, because silver prevents the growth of bacteria,’ Saarinen says.

The developed coatings are extremely thin, only a couple of hundred nanometres. The project tests a nanotechnology-based coating method that makes it possible to coat large surfaces quickly and cost-efficiently.

‘Surfaces that prevent the growth of bacteria are very much in demand by places such as hospitals, where hospital-acquired infections cause major harm to patients and significant costs to society,’ Saarinen says.

In the future, hospital door handles, bed frames and table surfaces could be coated with bacteria-resistant metal nanostructures.

The method also lends itself to the coating of porous materials, such as filter paper.